With temperatures in the 30s, high winds and snow flurries, Saturday's ultimate Frisbee tournament was anything but hospitable. For Beth Aubuchon, however, it could have been a whole lot worse.

This is the biggest year yet for the tournament. Twenty-two women's teams from around the country are spread out over Hinkson and Epple fields. Cheers echo off the frozen landscape.

So far this tournament, nobody on her team, the MUchachas, has been injured. Knee injuries are the most common, but last year Beth broke a finger. Her pinkie still sticks out at an uncomfortable angle.

"This is truly a team sport," Beth says. "You have to rely on each other to score. One person can't win the game."

After each catch, a player has 10 seconds to throw to a teammate and can only pivot as a defender tries to block the throw. On the field, Beth moves around making passes and catches with hands bare to the freezing temperatures. It's too hard to grip with gloves on.

On the sidelines, the team huddles under blankets. "I love my Frisbee family," Beth says, hugging a teammate.

Their next opponent is late to the field. Beth hangs out on the sidelines as seven of her teammates line up in the end zone to begin assessing points. For each five minutes the other team doesn't show, the MUchachas get a free point. These are the easiest points they've scored all weekend.

They shiver in the high wind. Eating bananas and granola bars, they laugh and fidget to stay warm.

"Have we scored yet?"

Beth checks the time. "Not yet!" she yells back. 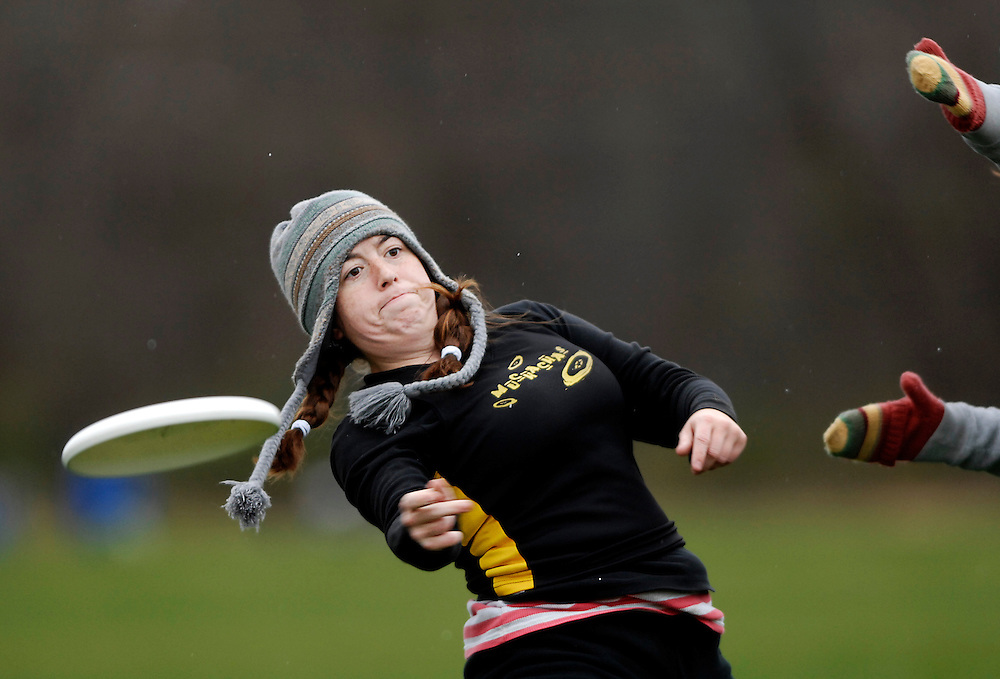